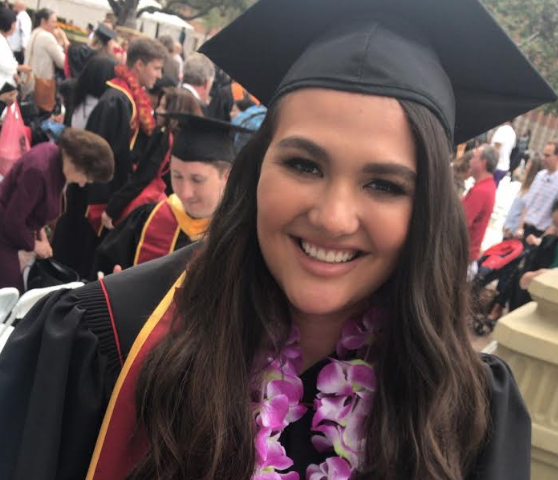 Most people are familiar with the influences of artists, actors, and journalists on today’s pop culture, but few are aware of the many professionals that support them from behind the scenes.

“Keely and Pierce are just the nicest people imaginable and the most incredible people to work for,” said Deaver.

Deaver’s hard work and dedication were soon rewarded when she became an Information Management Coordinator at the Screen Actors Guild-American Federation of Television and Radio Artists (SAG-AFTRA) – a labor union that represents over 160,000 professionals that work in the entertainment industry. In her new role at SAG-AFTRA, Deaver manages agency franchising, facilitates client-agent relationships, and provides services to industry professionals.

“I love that I ended up exactly where I always hoped that I would,” said Deaver. “I knew from a very young age that this is what I wanted to do with my life.”

Deaver resides in Los Angeles with her French bulldog, Lyla. She views her position as an opportunity to “work in an industry so closely related to the lifeblood of Los Angeles” and finds it incredibly rewarding to fulfill her dreams of contributing to the entertainment industry.

Deaver’s story, however, began at Vanguard. Several teachers, including Jen Ferretter and Joe Flowers, helped her to recognize her passion for the creative industry and to figure out a path that not only suited her interests and skills, but also created opportunities that she could pursue with enthusiasm and vigor.

“They really encouraged and nurtured my drive to work in a creative field, rather than squander it, which I think is more common than not in society and high schools today,” said Deaver.

“I know it sounds cheesy, but it is very true,” said Deaver. “You can’t constantly be getting in your own way. There will be plenty of other people and obstacles to do that for you.  You have to be your number one supporter and fan.”