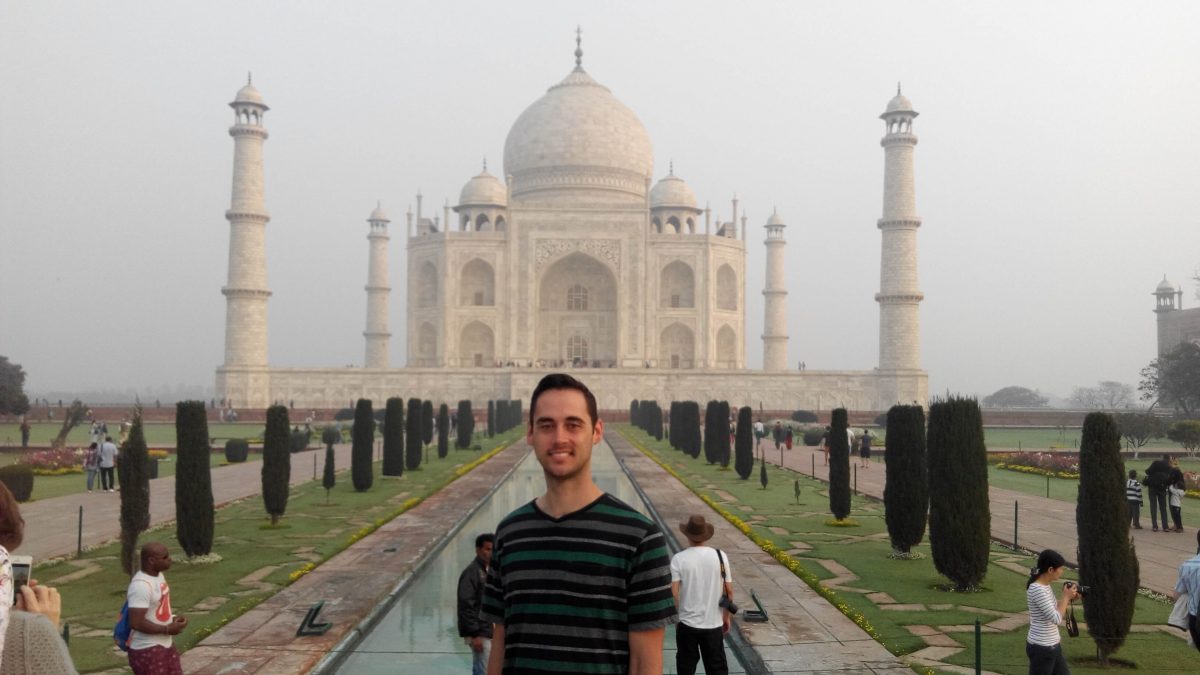 Eric’s passion for travel has taken him to 48 countries on five continents, and much to his surprise, it ultimately landed him back where it all started – at Vanguard. Eric is Vanguard’s English as a Second Language instructor (ESL), helping international students to navigate a new school and to thrive while learning the English language. “We work a lot on cultural differences and expectations, as well as English proficiency,” he said. Every Friday his ESL students teach the class so that they can talk about and share things that are important to them. Eric graduated from Vanguard in 2005 and went on to earn a B.A. in History from Baylor University, where he specialized in Chinese History. After graduation, he took a year off as a “working holiday” to New Zealand. With a one-year work and residence visa, he was able to work various jobs including a farmhand on a kiwi orchard and a worker on a bee farm. “At that time, my plan was to return after a year and pursue a masters degree in Chinese history,” he said. “But by the end of the year, I had fallen in love with traveling, meeting people from all over the world, and learning various new skills in new cultures.” For the next seven years, he traveled the world. Eric learned to surf in Australia, ice climb in Iceland, scuba dive in Thailand and ride horses in Kazakhstan. To fund his grand adventures, he took odd jobs, eventually discovering a passion for teaching English. “I worked in Shenzhen, China for three years, teaching English at a public high school,” he said. “I was pleasantly surprised that I really enjoyed teaching.” Not only did it allow him to hone a new job skill and improve his Mandarin, it also gave him the opportunity to learn more about the culture that captivated him in college. This spring, he returned to the States and found his way back to Vanguard, where he has fond memories, including playing viola twice as part of the all-state orchestra, enjoying Emma’s Days and Field Days, and working on “cool projects” assigned by Mrs. Marshall and Mrs. Johns. Eric hopes his ESL students and all of the students at Vanguard take advantage of the safe space the school gives them to make “practice jumps” at life like they would in skydiving. “My advice for students is to not be afraid to take risks,” he said. “Take the plunge and jump out of the safety of the plane. Risks are never as scary once you jump, and you can really love the fall. But you still always wear your goggles and a parachute.” Vanguard provided the goggles and the parachute, preparing him for life’s jumps, complete with a backup plan or two for when things don’t go as planned. “Vanguard helped prepare me to take many jumps along life’s journey,” Eric said. “This is where I learned that there are always more ways than one to look at – and solve – a problem. You have to confront it and adapt to some new changes.” He is looking forward to helping a new generation of Vanguard students find ways to take calculated risks and land many happy landings.

• Send us updates about your address, career, family, and achievements.
• Contact the school if you can help plan your class reunion, need contact information, or to submit nominations for Vanguard’s Distinguished Alumnus.
Please fill out the three-minute Vanguard Alumni Survey. Please contact the school about upcoming reunions! Submit any ideas or updates to chelsa_ressetar@vanguard.org
Update Your Alumni Information
Share