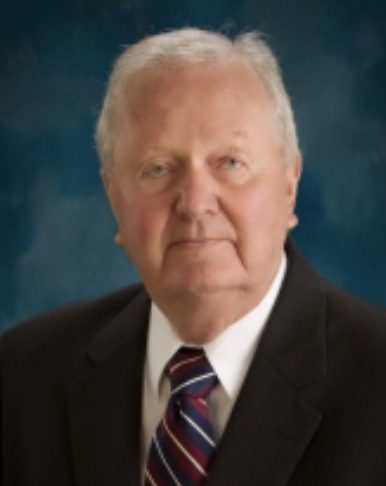 Cullen Smith – A man of humility

Cullen Smith was a Vanguard Founder and instrumental in enhancing the arts program and academics at Vanguard for over 48 years! He was interested in learning from others and treated everyone with respect. He could always make a stranger feel welcome, and whomever he talked to would feel that who they were and what they were doing were important, and what they thought mattered. His intelligence, council, and support have helped to guide Vanguard since 1973.

He will be missed and our thoughts and prayers are with his family and friends.

Article in the Waco Tribune Herald 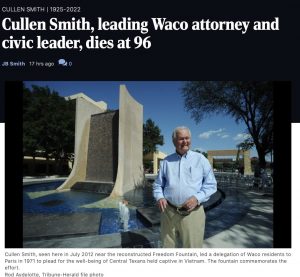 A funeral service April 30 will honor the life of Cullen Smith, who is being remembered this week for his decades as a leading attorney, city council member and civic leader in his native Waco.

Smith, who died Saturday at the age of 96, was involved in many community causes over the years, from meeting with North Vietnamese leaders over the fate of U.S. prisoners of war in the 1970s to helping the city of Waco battle upstream dairy pollution in the early 2000s.

“I think he is a model citizen who used his time and talent to benefit the city,” said Stephen Sloan, who has recorded hours of interviews with Smith as the director of Baylor University’s Institute for Oral History. “To see just how civic-minded he was is pretty inspirational.”

Smith, a 1950 graduate of Baylor Law School, joined what is now Naman Howell Smith & Lee in 1953 and eventually served as managing partner, president and chairman, remaining of counsel until his death. He was also president of the State Bar of Texas from 1978 to 1979.

Attorney Roy Barrett of Naman Howell Smith & Lee said Smith was a mentor to him and many others.

“He was the best lawyer I have ever seen at client relations,” Barrett said. “He was an innovator and creative thinker regarding the practice of law.”

Barrett said that as early as the 1960s Smith was an early adopter of management techniques needed to handle the complexity of modern litigation.

But he was also a savvy persuader, Barrett said.

When Coryell County landowners filed suit to stop Fort Hood from confiscating their land in the 1970s, Smith filled two Boeing 727 planes with the landowners and flew them to Washington, D.C., where they met with congressional leadership and ended up on national news. The Army backed off on its plans to take the property.

Smith grew up on Trice Avenue in Waco and attended Waco High School, where he graduated in 1943 in the middle of World War II. He joined the U.S. Marine Corps, which he served as a second lieutenant until his honorable discharge in 1946. In 1948, he married Laura Risher “Mickey” Dossett of Waco and graduated from Baylor University.

Over the years, the couple would be involved in establishing the Episcopal Church of the Holy Spirit, Vanguard Preparatory School and Art Center Waco, according to an obituary from the Smith family.

Smith was involved in the early 1960s effort to quietly desegregate public facilities in Waco, and he advocated for minority advancement in the professional world of Waco, according to the obituary.

He was also an important player in Urban Renewal, a local-federal partnership that was intended to redevelop blighted parts of the inner city, especially along the Brazos River, with new streets, infrastructure and housing.

One of his most ambitious endeavors was an attempt to persuade North Vietnamese leaders to reconsider their treatment of American prisoners of war. He was the chair of a group called the “Waco Dozen” who traveled to Paris in 1971 to meet with those leaders as the Vietnam War raged on.

In a rare concession to American concerns, the leaders agreed to meet with three of the group, including Smith, Karl May and Tribune-Herald Editor Harry Provence. Through a translator, they inquired about the condition of several Central Texas prisoners of war.

The outcome of the meeting was uncertain, but the community effort was widely celebrated and ultimately commemorated in the Freedom Fountain constructed in 1973 at what is now the Waco Convention Center.

Smith served on the Waco City Council from 1983 to 1985, including a term as mayor pro tem. Also in 1985, Smith proposed to the city council an event that would become the Waco Wild West Bicycle Tour.

Smith officially retired from Naman Howell Smith & Lee in 2002 as his eyesight degenerated, but he remained a regular presence at the firm and began lending his expertise to the city of Waco on a volunteer basis.

Mayor Linda Ethridge recruited Smith to help the city fight for regulations to rein in pollution from dairy farms along the North Bosque River watershed upstream of Lake Waco. Smith accompanied city leaders to meetings with state and federal regulators to argue for new rules on waste disposal.

“When Waco needed someone to step up on something like the watershed issue, he was always there,” said Wiley Stem, a retired Waco city manager who was part of the city’s battle with the dairies in the early 2000s.

“Cullen knew Waco, and he knew the issues, and he could lay out Waco’s position better than anybody,” Stem said.