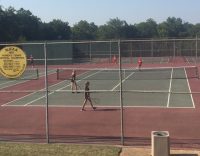 The Vikings competed in multiple matches in both singles and doubles against the experienced Advanced Midway team. While Midway won, the Vikings played hard in the heat and improved throughout the match. The middle school team competes next October 2 against Robinson.