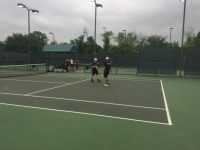 Vanguard Vikings got 2nd to place in the TAPPS State Tennis Tournament. Graham Gardner and Evan Mastin lost in a super-tiebreaker battle in the finals, after winning one match yesterday and two others today, including a 6-0, 6-0 win in the semifinals. The team came up just a little short in the tie-breaker in the last match. Final score 5-7, 7-5, 7-10. 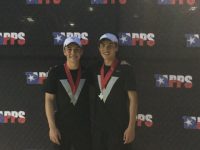