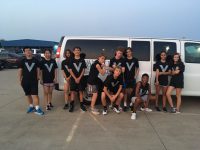 The Vikings started off with competitive matches in boys doubles. The number one team of Karch Knoll and Trey Cofer went to a super-tiebreaker for the third set and lost by only two points. In boys singles, Karch Knoll won 8-6. The Viking girls, consisting of all freshman and one junior, were outmatched by an experienced team of upperclassman. The girls maintained focus and effort throughout and gained valuable experience.  The Vikings High School team competes next on September 21st, against China Spring.