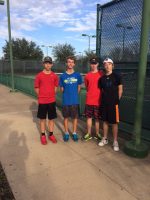 A number of Vanguard players participated in the Frostbite Open this past weekend in Waco. Trey Cofer won consolation 16 and under singles. Karch Knoll got second in 14 singles. Karch and Trey placed second in 16 doubles. And James Merchant made the semifinals in 14 singles.  Thomas Singletary competed in in his first USTA and showed consistency in serving and groundstrokes winning a few games against the #1 seed.