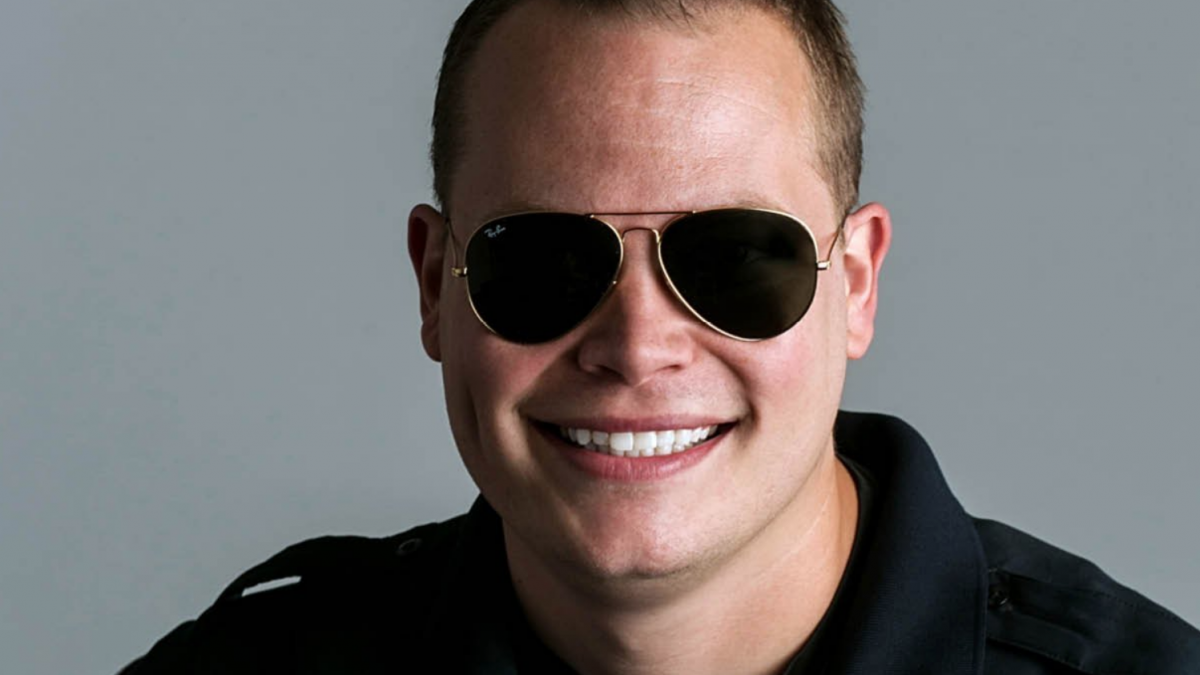 The path to personal and professional success is not always a straight line. No one knows that better than Brad Uptmore (’98). The now award-winning public information officer for the Southlake Police Department said he wasn’t always so certain about how he could make his mark on the world.

After graduating from Vanguard, he attended Baylor University.

“I had no clue what I wanted to do with my life,” he said.  “I took the basic classes and then my junior year I just kind of declared ‘oh I’ll be a film major’ out loud. That’s obviously not the way college works, so I went to a counselor and found the best path for me would be telecommunications and public relations.”

He moved to Chicago after graduating and worked in subprime mortgages where he “made a lot of money, but felt very skeezy”

doing it. Chicago didn’t agree with him for many reasons, Uptmore said.

He moved back to Dallas and worked at a Barnes & Noble.

“I loved it but was making $8 an hour as a college graduate,” he said. “I wrote a blog about all the weird things that go on at Barnes & Noble, but when the managers found out about it, I was fired. I wanted to find something right in between and I wanted back in karma’s good graces.

When he returned home, he saw a full-page ad for the Dallas Police Department on the table and I thought that might just be the job for him.

“I worked for 10 years and a day for Dallas before [transferring] over to Southlake and I’ve now been here almost three years,” Uptmore said.  “I was promoted to the public information officer role in February of 2018 and have enjoyed immense success there.”

This year, Uptmore and his team won the Public Relations Society of America’s (PRSA) Silver Anvil award, which he described as “the Oscars of the public relations world.” The award was presented in New York City, and it was for Most Effective Campaign $5,000 or less.

Uptmore said he loves almost every single thing about his job, which is something most people cannot say.

Police Department but also every police department in the nation,” he said. “ I love that I get to interact and educate the public and make them feel safer at it.  In today’s climate, it’s insanely important to humanize the badge and I think we’ve done great at that.

Mostly, he said he loves telling the stories of amazing officers who suit up in a bulletproof vest each day to protect us.

“Cops don’t choose this career for recognition,” he said, “but I feel their stories need to be told to improve public relations.”

Uptmore has two boys, Landon, 9, and Xander, 5.  He said he remembers Vanguard as a place where he finally fit in.

“I felt I had found other people like me there,” he said.  “I had been bullied and beaten up at my old school for such simple things like because I like Star Wars.  I remember being in a computer class at Vanguard and watching a senior make a Powerpoint about Star Wars and everyone was like fascinated by it.  I wasn’t harassed because I was smart—everyone at Vanguard was smart and that was ok.  Not even ok—it was championed.”

Hesitant to name a favorite teacher, Uptmore said he remembers many of them fondly.

“This is a trap question and it’s like asking which of my fingers I’d be ok with losing,” he said.  “But I have strong memories of Mrs.

His advice for current students is simple.

“Live each day with kindness and love,” he said. “Don’t envy what others have.  Your path through adulthood isn’t going to be a straight line of happiness and perfection.  It’s going to look like a stock market chart with drastic peaks and many valleys.  Don’t shy away from getting a therapist if you’re having a hard time.  Don’t focus on ‘me me me’ all the time — look for a way to do things for others, even simple things like an out of the blue smile or holding a door for an older person. Also, don’t move to Chicago for a college romance.”

Click here for the recent article on Brad's award.