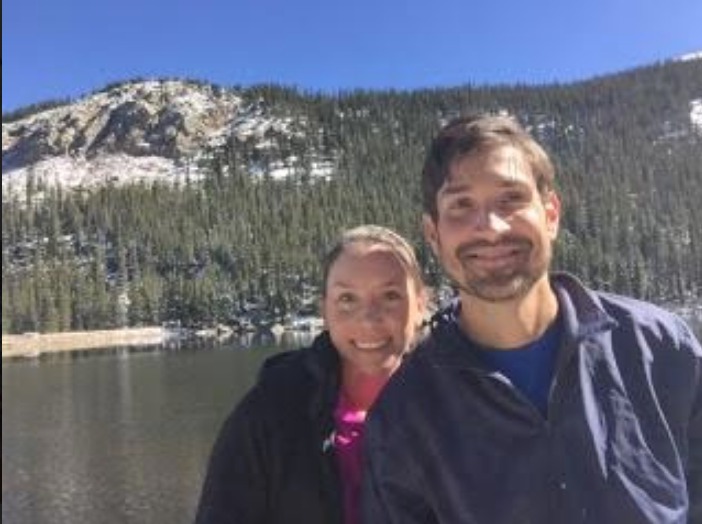 You might say education and the Vanguard tradition are in Grant Goble’s (‘02) blood. The son of a former Viking Head of School, Goble is following in his mother’s footsteps and is now working on his Ph.D. in Curriculum and Instruction at the University of Denver while serving as a research assistant and adjunct professor at the university.

After Vanguard, Goble attended Texas Christian University where he earned a B.A. in Theatre Arts and a M.Ed. in Secondary education. After he completed his M.Ed. Goble began teaching and directing high school theatre with Plano ISD, ultimately ending up at Plano West. He taught and directed theatre in Plano for 10 years before deciding to move to Denver to pursue a Ph.D. in Curriculum and Instruction at the University of Denver. Goble said he chose to pursue a Ph.D. in Curriculum and Instruction because of his experiences as a theatre teacher.

“I was able to work with a diverse student population and was able to see students thrive within a theatre program,” Goble said. “I had students find success in theatre when they struggled in other areas. It was through these experiences that I thought I could contribute to education and educational research on a larger scale. Impactful teachers and transformational educational experiences can have a profound influence on the lives of all students. I choose to pursue my PhD in Curriculum and Instruction to have a greater impact on education.”

“She is a lifelong educator, which has influenced my trajectory, whether I knew it or not,” Goble said. “I had several truly transformational teachers during my time at Vanguard, but it wasn’t until college that I realized my calling to education. While I was studying theatre at TCU, I had an inspirational mentor, Dr. T.J. Walsh. We would often talk about what my future holds and career paths, and ultimately we began talking about theatre education.”

It was through these conversations and his theatre and education coursework, Goble said, that he knew teaching would be in his future.

“I have a passion for theatre and education and when the two intersect it can be inspiring and empowering for students,” he said. “What I love about theatre education is seeing success in students. Teachers love seeing their students succeed in the classroom but seeing the non-academic success can be far more rewarding. Examples of these would be seeing a student who struggles to fit in with traditional classes or socially find a home within the theatre program, seeing students find their voice and self-confidence on the stage, and seeing students find their identity through their expression in the arts.”

Now as a Ph.D. candidate Goble said he is excited to be on the research end of what he experienced daily as a teacher.

“I am researching these transformational moments in theatre arts,” he said. “Within teacher education, I am now helping new teachers prepare as they enter the field. My intentions are to have a greater impact on education as a whole through my teaching and research.”

Goble married his high school sweetheart Kate Cunningham Goble (‘03).  They have two Golden Retrievers, Finn and Nova. They also have a cat named Figment, which the couple got together when Goble was just graduating from Vanguard and Kate was going into her senior year.  Additionally, Grant and Kate's niece is a current 8th grade student at Vanguard.

Vanguard prepared Goble in several ways for success in college and beyond, he said.

“The first and most apparent is being prepared academically,” he said. “I felt the rigorous classes at Vanguard prepared me to handle college classes, taught me strong study habits, writing skills and time management. Several of my classes, such as A.P. European History, were approached like college courses, so many classes were not that different or more difficult than what I experienced at Vanguard.  I also feel all the extracurricular activities helped prepare me for success. I was able to participate in student council and a wide variety of other clubs, I played several sports, participated in theatre and took on leadership roles while at Vanguard. All of these responsibilities help me become independent, develop interpersonal skills, build collaborative skills, and laid the groundwork during middle and high school for where I am today.”

There’s no doubt, Goble felt Vanguard prepared him for college.

“I was prepared academically because I knew how to approach a class,” Goble said.  “I learned how to get through difficult and dense coursework. I developed note taking skills, strong study skills and writing skills. My involvement in so many extracurricular activities helped me learn time management, which is a crucial skill in college. In addition to being prepared academically for college, Vanguard helped prepare me for the overall college experience. I had developed independence, adaptability and a variety of other skills which I took with me to college, which helped me be able to navigate these new experiences.”

Goble reflected over some of his most memorable Vanguard teachers.

“I became a theatre teacher and director, so I had a lot of influence from Dr. Johnson who was my theatre teacher and director,” Goble said. “I had great experiences with many other teachers as well, which have influenced who I am today. If I had to name a single teacher it would be Mr. Livingstone, or as we knew him, Stone.  It’s obvious Mr. Livingstone has a larger than life personality, but he is also a passionate educator who cares deeply about his students and the content he teaches. In the classroom he is a very effective teacher, providing a wide array of learning experiences, which really connect the students to the content of the course. He combined traditional lectures with active learning, such as throwing water balloons at each other to study the

Revolutionary War. He builds a respect for the content.”

Goble cited Livingstone’s WWII course, where he connects veterans and students and instills a respect that crosses generations.

“Experience everything you can while you are at Vanguard and make the most of these experiences,” he said. “Vanguard is unique in that students have a wide array of opportunities, and I encourage students to seek out those opportunities. You will find the thing that speaks to you and where you can carve your path. No matter what your interests are, you can find that space where you feel brave with who you are. It can be within a classroom or with a specific teacher. It can be in athletics. It can be within the arts such as theatre or orchestra. It can be with an academic club. It can be with a multitude of these. There are outlets for all students, and if you have not found your outlet, don’t be discouraged. That avenue exists, you just have to find it.  These experiences can help shape and form your future and build lifelong bonds.”

Grant holds the school record for the 1600 (online) at 4:42 and won the Irving Marathon!  Anything you want to tell us about how you've succeeded or why you like running?

Unfortunately for the school record they are missing my brother Scott Goble’s times.  In high school he was a little faster than I was, and he is missing from the 1600 and 3200 times.  We were both all-state in both of those events. I began running in 7th grade because my older brother Scott ran.  It was something that came pretty natural for me.  I wasn’t that fast but could maintain a good speed for a long time.  I have been a runner ever since 7th grade.  Several years ago, Scott and I decided to do a marathon and that challenge stuck with me.  It is difficult to describe the catharsis of the marathon. The marathon is something completely different.  There are a lot of mixed feelings of pain and reward you experience when you are training for and running a marathon.  Running can be a very cathartic feeling and you really learn a lot about yourself during the process. It is not just running the marathon, it is about the months of training leading up to it, day in and day out.  After that first marathon I decided I have already trained so let’s do another one in a couple of months. My time greatly improved, and that is when I began to set my sights in qualifying for the Boston Marathon. I was within a few minutes of qualifying a few times, but finally qualified when I won the Irving Marathon with a 3:00:26 time.  It was an incredible experience achieving a difficult goal that I had been working and training for daily for a few years and I never thought I could win a marathon. I ran the Boston Marathon in 2016, which was an incredible experience. My family was there to watch and support me. It was a celebration of all my previous training and efforts.  Since then I have run several more marathons and half marathons and I continue to run to this day.