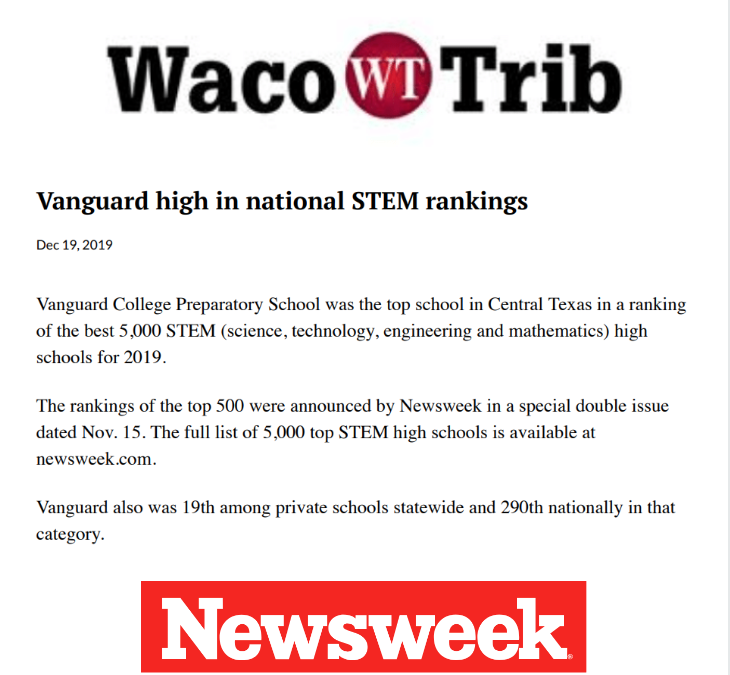 Vanguard College Preparatory School was the top school in Central Texas in a ranking of the best 5,000 STEM

The rankings of the top 500 were announced by Newsweek in a special double issue dated Nov. 15. The full list of

Vanguard also was 19th among private schools statewide and 290th nationally in that category.

Overall (including public and charter schools), Vanguard was the No. 634 school nationwide with a score of 87.17.

Scores were curated from STEM.org Educational Research using a proprietary scoring logic that took into

consideration a broad set of quantitative and qualitative data collected over a four-year period from 2015 to 2019.

STEM — as defined by the Congressional Research Service — while preparing them for postsecondary outcomes.

Additional factors, including affluence and median household income, were taken into consideration in compiling the

Joe Flowers, director of technology at Vanguard, has been at the school since its inception in 1973.

“Vanguard was founded on the philosophy that technology is a major foundation of the learning experience,” he said.

The Vanguard robotics teams have been successful in meets in recent years.

Live Oak Classical School was No. 2,686 in the national rankings. Among Central Texas public schools, Midway