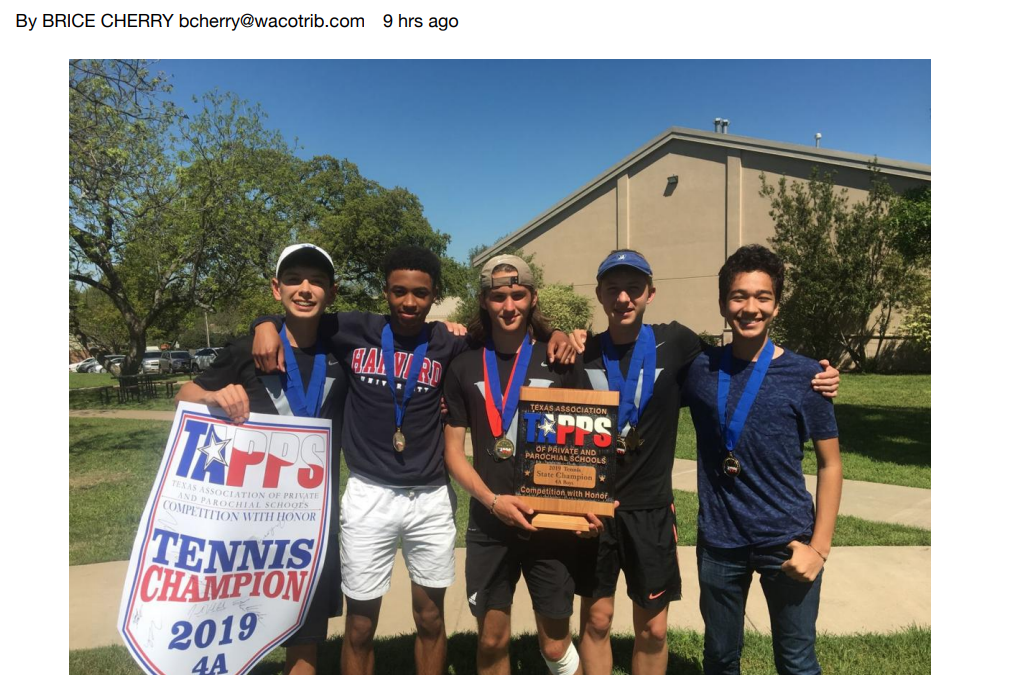 Great Article in the Waco Tribune-Herald on our Tennis Win!

The walls of the gym at Vanguard College Preparatory School are draped, literally, with all manner of banners proclaiming the school’s history of athletic successes.

It’s time to redecorate again, because they’ll have to find room for another one.

Vanguard captured the boys’ team title at the TAPPS Class 4A State Tennis Tournament this week at the Waco Regional Tennis and Fitness Center. While the Vikings have experienced recent playoff glory in a variety of sports, including a run of 12 straight state titles in boys’ golf from 2005-16, this marks the first team crown for the boys’ tennis program since 2005. It’s the sixth overall.

“But what makes this one really special is that it’s a state championship in 4A,” said Vanguard tennis coach Greta Knoll. “And it wasn’t one or two players doing it, it was a whole team of kids, even ones who weren’t playing at state, who were pushing everybody to try to do something special.”

What also made this one sweeter than an assembly line job at M&M Mars was the redemption factor. In each of the past two seasons, Vanguard finished as the state runner-up, missing out on a title by a mere point in 2018.

“I think every year we go in wanting to win a state title,” Knoll said. “What made this year tough is that we didn’t completely know the lineup going in, as we had one not playing tennis anymore. But we had some guys step up and fill the hole, and it worked out really well.”

One of the players who emerged as a force was sophomore James Merchant. He qualified for state in boys’ singles, and cruised through his first two state matches with straight-sets wins while dropping only three games in all.

In the semifinal, Merchant had to dig deep, pulling out a three-set win over Charlie Michaels from Tyler All Saints, 6-0, 7-6, 6-3. “James was really determined in that third set, and that turned out to be big for us in terms of team play,” Knoll said.

Meanwhile, in boys’ doubles, Vanguard qualified two teams for state, the duo of Langston Wade and Adrian Northcutt as well as the team of Karch Knoll and Ethan Marsh. Wade and Northcutt drew the top-seeded team from Boerne Geneva in the first round and fell in straight sets. But Knoll and Marsh wouldn’t be denied. They dominated their first three matches, all in straight sets, while dropping only five games.

Then in the title game, Knoll and Marsh hustled their way to a 6-1, 6-4 triumph over Arlington Grace Prep’s Luke and Stephen Moore to take the state doubles crown.

“They played so well, some exciting matches,” Greta Knoll said. “In fact, Karch had one play where he ran a ball down and hit the ball outside the net for a point, like (Rafael) Nadal once did, and (Roger) Federer has had some shots like that. The other team just waited for a second like, ‘Wait, can you do that?’ It was really fun.”

In addition to the boys, Vanguard also ended a state- qualifying drought on the girls’ side by sending the doubles team of Rachel Merchant and Courtney Wiethorn to state. Wiethorn and Merchant lost in the first round, but it took a third-set tiebreaker to oust them, and Wiethorn is just a freshman, so she has a bright future ahead.

Same holds true for the boys’ squad, which was sophomore-heavy.

“All the guys were sophomores, and we’ve also got some really good middle school kids coming up,” Greta Knoll said. “We’re looking forward to the future.”